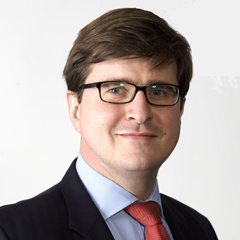 James has been providing financial advice and modelling services to the Power, Oil & Gas and Telecommunications & Satellite sectors since 2000, while at Portland Advisers, Bank of Scotland and PricewaterhouseCoopers.

At Portland Advisers, James has advised on a number of large project financings involving leading export credit agencies. Highlights include  advising the export credit agency group on the $4.6bn debt financing of Coral FLNG, Mozambique, advising Seaborn Networks on a $500m financing for the first ever direct sub-sea telecommunications cable between New York and Sao Paolo; advising Engie on the $1.35bn  financing of two 740MW power projects in the Sultanate of Oman and advising the Gazprom-Bulgarian Government joint venture on the financing for the Bulgarian section of the South Stream gas transmission pipeline.

Prior to joining Portland Advisers in 2009, James worked as an Associate Director for Bank of Scotland for three years and for a further nine years in the PricewaterhouseCoopers Corporate Finance Advisory team.

James has a BSc (Hons) from Edinburgh University, trained and qualified with PricewaterhouseCoopers and is a Fellow of the Association of Certified Charted Accountants (ACCA).